The acsr package helps extracting variables and computing statistics using the America Community Survey and Decennial US Census. It was created for the Applied Population Laboratory (APL) at the University of Wisconsin-Madison.

The functions depend on the acs and data.table packages, so it is necessary to install then before using acsr. The acsr package is hosted on a github repository and can be installed using devtools:

Remember to set the ACS API key, to check the help documentation and the default values of the acsr functions.

The default dataset is acs, the level is state (Wisconsin, state = "WI"), the endyear is 2014, and the confidence level to compute margins of error (MOEs) is 90%.

The acsr functions can extract all the levels available in the acs package. The table below shows the summary and required levels when using the acsdata and sumacs functions:

Getting variables and statistics

We can use the sumacs function to extract variable and statistics. We have to specify the corresponding method (e.g., proportion or just variable), and the name of the statistic or variable to be included in the output.

To download the data can be slow, especially when many levels are being used (e.g., blockgroup). A better approach in those cases is, first, download the data using the function acsdata , and then use them as input.

When computing statistics there are two ways to define the standard errors:

For more details about how standard errors are computed for proportions, ratios and aggregations look at A Compass for Understanding and Using American Community Survey Data.

Below an example when estimating proportions and using one.zero = FALSE:

When the square root value in the standard error formula doesn’t exist (e.g., the square root of a negative number), the ratio formula is instead used. The ratio adjustment is done variable by variable .

Decennial Data from the US Census

Let’s get the African American and Hispanic population by state. In this case, we don’t have any estimation of margin of error.

The output can be formatted using a wide or long format:

And it can also be exported to a csv file:

We can combine geographic levels using two methods: (1) sumacs and (2) combine.output. The first one allows only single combinations, the second multiple ones.

If I want to combine two states (e.g., Wisconsin and Minnesota) I can use:

If I want to put together multiple combinations (e.g., groups of states): 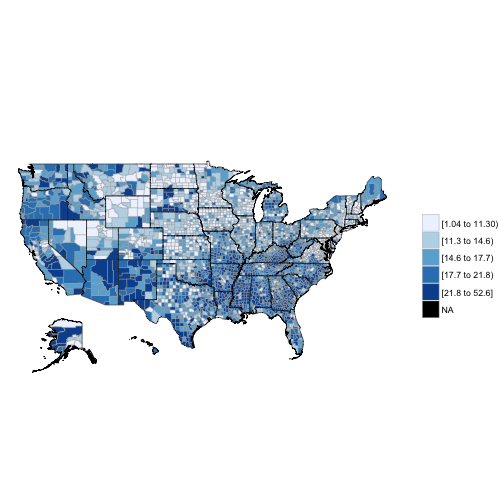 In sum, the acsr package: